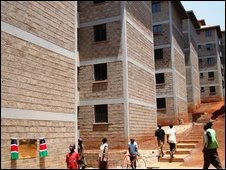 The UN has broken ground on its Kibera 'upgrade,' the BBC reports.

I know they say they're relocating people into new housing that will cost $10 (747 Kenyan shillings.) And I know the photo of the relocation housing looks basic but OK.

Still, the BBC doesn't say how far away the relocation housing is, and whether it is subsidized and for how long it will be subsidized, and whether it will make it more difficult for people to commute to their jobs.

Every time I see a bulldozer smashing into someone's home, I get a sinking feeling. What will become of the land in Kibera that the people are being asked to vacate?

UPDATE: The Daily Nation has a somewhat more complete story about the start of relocation in Kibera. For instance, it notes that this is a pilot program of just 600 apartments, built at a cost of 500 million Kenyan shillings--or almost $7 million. That's $11,000 per unit.
Posted by rn at 12:57 PM

The BBC doesn't mention any date, and there is nothing in Kenyan papers, on IRIN, or from Kenyan NGOs. Loks like this was old-ish information, recycled by the BBC!

Great point. When last I talked with someone from Kibera, a few weeks ago, they indicated that all the UN had done was install a few toilets.

I will ask the BBC whether we've been punk'd.

Actually you are wrong. Here's the Daily Nation article about the first phase Soweto Village reloction:

The Nation reports that the relocation housing is in the nearby 'highrise' community. We shall see whether this is a good thing or not.

A similar episode(s) happened in Dharavi a couple of years ago. The CBC did a documentary on the effects of relocation for squatters. Some liked it because it was quieter whilst others lost most of their livelihood and sense of community.

Think about it this way, when moving into 'modern' (Western) style high-rises, the dynamic shifts, as the NY Times article suggested. People's sense of community is demolished when the ground level shanties are. There are no places for the papads makers to do their thing. Plumbers can no longer be one's neighbour because they need to be professionals out-sourced from bigger companies.

The doc also explained how unemployment (formal or informal) rose astronomically because of the lack of 'menial' jobs.

Thus, rn, I agree that the new places look nice. I agree that the squatters may not even get to see themselves moving in. However, I question the social ethics of these housing developments.

International attention should be drawn upon what the hidden agendas are, usually commercial developments backed by an MNC. Although housing is a top priority for everyone, so should maintaining a community and business.

Top-down solutions can destroy the art of living. Relocating squatters shouldn't be such a one-sided process. Admins need to learn more about what is happening on the ground.

bw: Totally agreed. The future of squatter communities should not be determined through a one-sided process. The community should not only have a say, it should control its own destiny.

A community is not just a house. And, indeed, as the great Peruvian poet Cesar Vallejo put it, a house doesn't exist until people are in it.

As for the hidden agendas you mention: everyone in Kenya knows that Kibera sits on incredibly valuable land--just of popular Ngong Road and a few minutes ride or walk to downtown.

that's 'just off Ngong Road'
sorry for the typo

i was in kibera when the first people (from soweto east of kibera) were moved to the new flats, they were very excited. what most of them feared was the idea of sharing a house with other families,as one is entitled to a single room in the 3rm flat, with shared bathroom, wc and kitchen...which isnt much different from how they lived in kibera.(one can also rent 2rms or the whole house).
The development is only across the kibera valley,it almost meets kibera!The planned phases of the slum upgrading programme will be IN KIBERA, not near, not far! soweto east residents were the first to be moved to make way for the construction of new flats,to be occupied by kibera residents. you can get the masterplan, and house plans on the net...search for KENSUP.
what we should worry about is whether the real kibera residents will occupy the new houses, or folks from outside who find the houses a big bargain...ksh1,000 (about $13.2) per month, with electricity and water, and a walking distance to the CBD and industrial area.

Still:
1. I wonder about the wisdom of single rooms with shared kitchens and bathrooms. In some ways that's less than what they had in Kibera.

2. These houses are subsidized. How long will they continue to be subsidized? Who owns them?

3. Why can't the people be given ownership opportunities on site in Kibera?

4. What happens to the land that they free up in Kibera?

5. Will they still be able to do some income generating work right outside their house?

I haven't been able to find the maps and such that you refer to on the UNHabitat site or the Kenyan Housing Department site. Perhaps you can refer us to the actual link.

Governments presentation of the plan, 2005 :
unpan1.un.org/intradoc/groups/public/.../UN/UNPAN021262.pdf .
It shows the general idea/ planning of kibera. The upgraded units take up the space, land isnt freed up as such.
They proposed community participation in the project, which in my opinion,is a fail so far. The kibera residents (the many I've spoken to) don't know much about the project.
Un-habitats earlier report:
http://www.unhabitat.org/downloads/docs/Press_SG_visit_Kibera07/SG%2016.pdf
The people who have ownership of land in kibera are the Nubians, who were settled there by the British Colonialists after they served in WWII, and have title deeds. The government intends to compensate those with genuine titles whose structures will be demolished during the Upgrade.
Tenants will be given a chance to own the units. They intend to setup a financing scheme.People can also lease out rooms in the houses to other parties and use the money to buy the units.
As for commercial activity, trading areas have been planned for in the scheme. There was talk of having shops on the ground floor of the new units. Those at the decanting site dont have shops, i didnt see any.

Your first link doesn't work, though, and your second, while interesting, is a memo from 2006 about using water and sanitation as a way of gaining trust and cooperation in Kibera. Of future plans, it simply says, "A layout of the development of the 12 villages is yet to be prepared."

My understanding of ownership in Kibera is more complicated than yours. There were structure owners and land owners. The original structure owners received permission from the provincial administration (often in return for payoffs) to build what is in Kibera now. Will structure owners be compensated? What about people who live in Kibera who, though scraping and saving, bought their structures? And the Nubians don't necessarily have title deeds--the studies I've seen suggest some dispute over whether the land was formally granted to them by the Crown. And, from what I understood when I lived in Kibera, there were also other people who had titles or made claims to the land, too.

You say that tenants can "lease out rooms in the houses to other parties and use the money to buy the units." How would this be possible unless there are spare units in the new buildings? Are there? And which tenants control those spare units? Seems to me there are lots of questions about this.

If you can point to someplace where this is all sketched out, that would be great.

Also, given what you've written, it seems that you have very specific knowledge of the Kibera plan. I'm wondering if you have been or are involved in it in any way.

I'm actually a final year architecture student in Nairobi and ive been involved in a kibera upgrading project (not kensup)for some years now. I've discussed with those involved in the Kensup project (some are my tutors). I'm currently writing my thesis pertaining Nairobi's informal settlements. Some articles from the local dailies, highlight the reactions to the upgrading

The adoption to the new environment will be gradual, as is in any relocation. On compensation; the structure owners, especially those who don't reside in them may not be compensated. The structures are not legitimate according to the government,the matter is not settled( Many structures are on infrastructure reserves). Those claiming ownership of the land will have to produce title deeds.
As for other hidden motives, some will illegitimately gain at the expense of the intended beneficiaries; as the case of Nyayo Highrise Estate (which was meant to house kibera residents, now rented by the middle income group). But as long as affordable housing in an ideal location is provided, the project should be an improvement to the lives of the urban poor in Nairobi.

Robert,
I was wondering if you have heard/read any more information on this slum-upgrading project in Kibera. When I heard about this project recently, I came to your blog to see if you posted any comments/info. I met you about two years ago when you spoke at Xavier University in Cincinnati, OH. I respect your opinion and am curious if you've had more thoughts on this issue. Having spent some time in Kibera, my initial reaction to this project was panic - I immediately wondered about all the roadside vendors - the 'hotels', the soda/candy stores....the women cooking outside over fires, selling chapati. What will happen to all of this?

Great question. This is one of the things that always came up when I discussed the rumored upgrading with my Kibera neighbors back in 2001. A neighborhood is so much more than a house. One risk of the upgrading is that it provides the house but denies the residents the means of making money to be able to pay the rent.

While Kibera is a mud hut shantytown, as you know, it is also home to a tremendous amount of entrepreneurial activity. Losing that for the purported benefit of shared apartments (two families share each two-bedroom apartment in the new housing the UN is building) would be a travesty. That would turn entrepreneurial and self-sufficient people into wards of the state.

The problem is, we won't know how these first 600 units really work out for people for some time. So this really is an experiment. If anyone from Kibera has any thoughts on this, please post them here.

I've also put up a new post about the position of the Nubians, Kibera's original residents, on the upgrading: http://squattercity.blogspot.com/2009/12/new-home-in-1178-years.html

I was in Nairobi in October when the first residents from Soweto East moved over into their new homes at the 'decanting site'. When I was there, the structure owners were unhappy and planning a court case with the government to seek compensation. I think the court case was due to be the 30th November 2009. I've been looking for information regarding the outcome of the case on line but I can't find anything. Does anyone have any information about this they can share with me please?