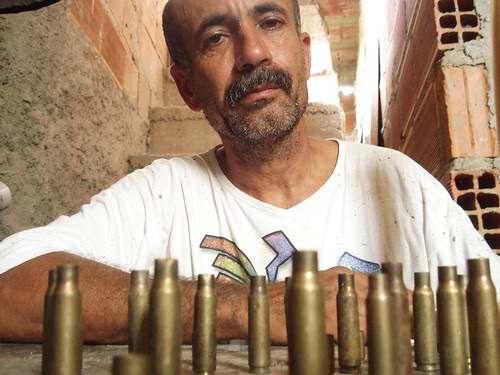 A fierce and impassioned take on the gun violence that plagues Rio's favelas, courtesy of Open Democracy. Refreshingly free of cant and nonsense. The article quotes a former Military Police leader acknowledging that the police are themselves involved in weapons trafficking.

And some observers feel that a culture of normal violence has been created.

"Arms no longer provoke fear in a population that is so used to bullets and the sound of gunfire," says peace activist Leonardo Pimentel from Jacarezinho favela, a few miles down the road. "Things you used to only see in Haiti, Gaza Strip or Iraq you see here now. There's a naturalisation of the presence of arms. When I was young every kid's dream was to be a police officer," he continues. "In the mind of young kids today the police are the enemy, because they killed their brother, their friend, their uncle. Their dream is to kill a police officer."

And there's this acknowledgement of the class-bound nature of the concern over violence:

William Alencar is a resident of the Favela do Timbau in the huge Maré complex. He is also a sociology graduate from Rio's prestigious Catholic University (PUC), where he studied on scholarship, and now works as a teacher. He illustrates the intersection between poverty and insecurity with the following example from his own life. "When I was an adolescent I was in a football team. Out of 15 people that were involved, 10 have since died. Out of the remaining five, I'm the only one to have studied at university. Violence itself hasn't increased [since then]," he believes. "Since the 1980s we have stories of violence. It's just that now there are heavier arms available and now violence has spread throughout the city. While the violence was within a space that wasn't affecting the Brazilian elite, that was fine. But when it started to arrive in the big streets, in the asfalto [asphalt - a synecdoche commonly used to refer to any urban areas outside the favelas], the [middle classes] started to get concerned."