The ANC's eviction plans in Durban

At the recent World Urban Forum, I asked Lindiwe Sisulu, South Africa's Housing Minister, about forced evictions in Durban. In case some readers of this blog can't believe that the African National Congress government engages in such tactics, so reminiscent of Apartheid, here's a press release from Abahlali baseMjondolo, a squatter organizing group that has emerged as one of the most exciting bottom-up social movements in the country. Abahlali says that, despite fine words in favor of squatters, the ANC, at least on the local level, is pushing a policy of "mass evictions and forced removals under its 'slum clearance' programme."

Two hundred families in the Motala Height Settlement are facing eviction at the hands of the eThekwini Municipality [the official name for the government of the city of Durban]. Legal experts have declared that the planned evictions are both unconstitutional and illegal. The Motala Heights community has declared that it will resist all attempts at eviction in the courts and by mass mobilisation.

After Ward Councillor Derek Dimba arrived at the settlement on 17 June 2006 with police and private security to mark out the homes slated for destruction the community quickly mobilised and won a promise that the process will stopped until a meeting with Dimba.

But yesterday Officer Pillay of the SAPS [the South African Police Service] returned to the settlement with police and private security back up and tried to continue the process of identifying homes for demolition. The community stopped the process. Pillay promised to return and break down the shacks. The Motala Heights Development Committee told him that "This is the land where we belong. This is not the land where you belong. Don't come back without our permission."

The Motala Heights settlement lies amongst the gum tress on the hill behind Motala Heights suburb which is, in turn, just behind the many factories in Pinetown's industrial area. It was founded in 1994 and the residents mostly come from Zululand, the Eastern Cape and Ixopo although some are from as far away as the Free State. Almost everyone came here to work or to reunite families divided by migrant labour. Most of the men in the settlement work in the factories and most of the women work in the houses in the adjacent suburb. There are almost 300 shacks in the settlement. The land is owned by local tycoon Ricky Govender and he is aiming to extend the suburb up the hill in a large private development after the shack dwellers have been evicted.

Dutch squatters fight to save their homes

Squatters in the Netherlands are organizing against a government proposal to reverse the country's notably liberal laws on squatting. See also this dispatch on squat.net.

Dutch squatters have reclaimed a tremendous amount of housing and been a positive force in helping to alleviate the country's housing crisis. To join the struggle to support the squatters, visit petitie.squat.net/en/.
Posted by rn at 9:11 AM 1 comment:

In further proof that squatters exist in the most unlikely places, The Fiji Sun reports that squatter communities are growing as urbanization continues on the island. The housing ministry is vowing to relocate any squatters who lose their land leases.

Vancouver, Jan. 20th: I arrived this afternoon in the temporary capital of the empire of ineffectual good guys known as the World Urban Forum. I'm cynical about these UN-sponsored gatherings (can't ya tell), but being a fly on the wall does give an opportunity to learn some things and make some contacts.

My own bad planning ensured that I was in flight and thus missed the session on squatter communities this morning. But I checked out a session on creative muncipal approaches to financing stuff for the poor in French-speaking Africa in the afternoon. Niamey, in Niger, has started a plan to map the central city, giving every house and address, thus making it easier to collect taxes (indeed, the statistics bandied about show that the city quadrupled the amount it collected after the survey.) Dakar, Senegal has started a municipal microfinance credit program. And Douala, Cameroon has floated an issue of municipal bonds to provide seed money for housing for poor people.

The theme of the forum is "Turning Ideas Into Action" but so far, my experience is that there's more hot air than concerted, connected, committed political action. Still, I can hope.
Posted by rn at 8:14 PM 2 comments:

The misery takes the headlines. And it's true: the number of squatters is increasing, and there is no excuse, in the 21st century, for so many people to be living without necessary infrastructure. But the dispatches, like this Associated Press report printed in the Guardian miss the interesting news.

Sounds awful, right? But it also means that 80 percent of the world's shanty dwellers don't live in extremely poor conditions. Memo to the UN: take a look at those communities.

My observations from my two years living in squatter communities around the world: squatters need two things for their communities to grow:

1. some guarantee that they won't be evicted.
This doesn't have to be a title deed or 'security of tenure' in some legal sense. The favelas of Rio de Janeiro and most of the gecekondu communities of Istanbul don't have legal security. They have only customary security. But everyone has accepted that they will not be evicted and so their communities have been able to improve and grow and develop and are now true functioning neighborhoods.

2. some access to politics.
This can be seized from the system through tough-minded organizing or made use of because government reaches into the communities to forge partnerships. But communities need to work the political structure if they are to get some of the infrastructural goodies that only government can provide: water, sewers, garbage pick-up, electricity.

If the world can offer these two things, squatters will build and wire and pipe their communities and turn them into the cities of tomorrow.
Posted by rn at 7:31 AM No comments:

8,000 evicted from two forests in Kenya, the East African Standard reports.
Posted by rn at 7:16 AM 2 comments:

Violence and a hunger strike as squatters in Almaty, the second-largest city of the former Soviet republic, battle to save their homes. The municipality wants the land, so the rumor goes, to turn it into a car racing track. So far, they have repulsed the police incursions and only a handful of homes have been destroyed. The Institute for War and Peace Reporting has the story.

"Because the [squatter-held] area does not technically exist in the eyes of the municipal authorities, there are no public utilities such as water, electricity and gas," IWPR notes. How typical: people are denied services on a technicality. As a squatter told the reporter, "Like all citizens of this republic we have equal rights to land." I would add: And equal rights to services, too.
Posted by rn at 7:11 AM 2 comments: 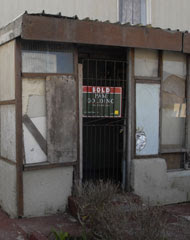 In the new South Africa, shanties have value. The shack in the photo recently sold for $21,000. The New York Times reports.
Posted by rn at 8:48 AM 3 comments:

1,000 landless laborers temporarily took over the lower house of the Brazilian Congress. Video here. BBC article here.
Posted by rn at 8:01 AM 2 comments:

Fiji squatters ask: what would Jesus do?

A group of Fiji squatters who have held their land for 60 years has applied to the Human Rights Commission and the courts to help them resist an eviction effort mounted by the Seventh Day Adventist Church. The Fiji Times reports.
Posted by rn at 5:37 PM No comments:

Cambodian authorities want the squatters to move 15 km out of town. Here's why, according to the article: "Land disputes are a hot issue in Cambodia, where garment factories and hotels have sprung up to expand the major textile and tourist industries."
Posted by rn at 5:32 PM No comments: