a great group working in Rocinha

Shadow Cities was named one of the top ten books of the year by planetizen!

An article from the Mumbai newspaper MidDay shows what real estate developers are planning for Dharavi, the city's largest squatter community. It's interesting that the reporter didn't talk with a single squatter.

I hope this will start a discussion

I think this reviewer misrepresents my argument, but I hope it may start a discussion about squatters rights

SHADOW CITIES: A Billion Squatters, a New Urban World
Robert Neuwirth. Routledge. ISBN 0-415-93319-6
In this superbly probing book, investigative reporter Neuwirth relates the struggles and successes of some of the world's most resourceful poor people, among the one billion urban squatters in countries like , , and . Having lived alongside them in these four countries and thus gained firsthand knowledge of their daily lives, Neuwirth is able to dismantle many common preconceptions about the so-called slums in which they live. The vast, bustling favela of Rocinha in , for example, has distinct neighborhoods, apartments for rent, dance parties in the street and local entrepreneurs, as well as drug lords and gangs. In 's Kibera, many squatters have white-collar jobs, yet lack the income to rent more than a simple mud hut. Clarifying local legal considerations and housing policy city by city, Neuwirth closely attends to the characters, historical particularities and human potential of the squatter communities he encounters. In his concluding chapters, he pulls back to address the U.N.'s role in ameliorating squatters' problems and polarizing notions of property ownership, among other issues. Pointing out that many major cities were founded on squatter-style neighborhoods, Neuwirth treats readers to some fascinating historical case studies in and . Compelling, thought-provoking and written with laconic grace, Neuwirth's study is essential reading for anyone interested in global urban affairs.
Posted by rn at 8:33 AM No comments:

This article is from the Kenya Times, which in the past was the mouthpiece of the oppressive ruling party in Kenya. I haven't seen any coverage of this elsewhere. If the South African government is sincere, it will work with squatters to create local control over their land and redevelopment. If it simply ships squatters off to substandard and horribly maintained privately-owned buildings, then this is nothing but a land grab.
Posted by rn at 2:11 PM 3 comments: 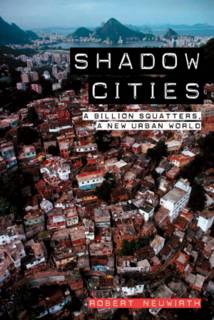 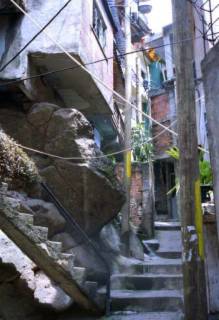 a beco in Rocinha

here's a photo of a beco, or pedestrian path, in Rocinha, the largest favela in Rio de Janeiro

I like how the ingenious housebuilder simply cantilevered his home over the rock outcropping.

Becos are the way to travel around the favelas, because most don't have roads wide enough for cars. Amazingly, most of the more than 600 favelas in Rio have been improved so much over the years that the homes are like the ones pictured here: multi-story affairs made from poured concrete and brick.
Posted by rn at 1:22 PM No comments:

Shadow Cities focuses on the lives and struggles of squatters in Brazil, Kenya, India, and Turkey, spanning centuries and cultures to make the case for these patriotic criminals, arguing that squatting is a venerable and legitimate form of urban development.

Shadow Cities is published by Routledge.