Here's an ugly story, courtesy of Human Rights Watch: The Nigerian miliary went on a rampage on August 24th and torched the Aker Base squatter neighborhood of Port Harcourt. The soldiers, acting in response to the killing of an army sergeant during the kidnapping of an Italian who worked in the nearby oil compound by armed militants, carried cannisters of gasoline and doused homes and businesses before setting them ablaze, residents said. Human Rights Watch says the soldiers and the Nigerian government must be held acountable for the unprovoked devastation of the community.
Posted by rn at 8:48 PM No comments:

"The flame is a demon that has destroyed our lives."

That's how a 6-year-old boy put it after a fire in a Durban shantytown on Friday that left hundreds of families homeless. The fire occurred in Siyasokola, a community whose name means "we are in dire need." This fire started from a paraffin burner, a common type of stove in such communities. A day after the fire, people were already reconstructing their homes with whatever scrap they could find As community leader Nhlanhla Mbili put it, "In December 2004 there was a fire disaster similar to this one. Somehow, rebuilding our shacks has become a part of our lives."

[Sorry there's no link on this post. The Sunday Tribune, from whose pages these details are taken, is subscription-only, even online. Thanks to Richard Pithouse for sending me the text of the article.]
Posted by rn at 8:38 AM No comments:

Baraka means hope in Swahili, and perhaps Barack Obama brought some when he visited two NGOs in Kibera. This is a story on his visit from the East African Standard.
Posted by rn at 10:37 AM No comments:

What to do about the housing crisis in the U.S.

A Washington Post reporter has penned an op-ed documenting the extent of the housing crisis in the United States. Here's the shocking lead: "In the past five years, housing prices in Fairfax County [Virginia] have grown 12 times as fast as household incomes." Reporter Michael Grunwald suggests that the cost of housing should be a major political issue.

But beyond pushing for more public policy pronouncements, his prescriptions fall a bit short: "The best thing local officials can do to promote affordable housing is to get of the way -- stop requiring one-acre lots and two-car garages, and stop blocking low-income and high-density projects."

Unfortunately, ending exclusionary zoning and upping density may result in more rental units, but experience shows that this will only nudge prices downward at the top of the market.

Question for you economic visionaries out there: what should we do about the ramp up in prices and the acute shortage of affordable housing in the United States?
Posted by rn at 10:09 AM 22 comments:

the power of incrementalism

The Financial Times gets it right: favelas have become better incrementally. As the article explains, "Rather than wipe slums from the map, the authorities looked to civilise them and integrate them into the urban fabric. Roads have been asphalted, water pipes and electricity lines extended into squatted settlements. Further measures ranging from the provision of street names and house numbers to the granting of legal titles to properties have been a feature of this approach, as have moves to introduce schools, clinics and regular policing."

In his dispatch from Diadema, a town of some 400,000 people on the southern edge of São Paulo, reporter Richard Lapper finds a community of "brightly painted cheap restaurants, beauty parlours and stalls selling fruit juice. Children play football and swim in a well-equipped sports facility financed by local employers. From a central bus station, modern coaches ferry residents to São Paulo's underground railway network, reaching the centre of the city in a little over an hour."

In other words, the squatter community is actually a real neighborhood. It's terrific. And it's terrific to see this transformation -- the product more of what people have done themselves than what government has done for them -- honored in a mainstream paper.

An interesting article in The Economist (subscription required, so no link here) highlights an Argentine study of a Buenos Aires neighborhood where half the people received land titles and the other half didn't. The study, called Property Rights For the Poor, (available HERE in an acrobat file) uses the Quilmes neighborhood as a test case for the theories of Hernando de Soto, who suggests that simply giving out land titles will allow squatters access to mortgages and other forms of credit that will liberate the dead capital inherent in their homes. The results: while having a title deed did encourage residents to invest in their homes, it did not give them more access to credit or create any increase in their incomes.

Families that had title deeds tended to have fewer kids, though, allowing the authors to conclude that "entitling the poor increases their investment both in the house and in the human capital of their children, which will contribute to reduce the poverty of the next generation."
Posted by rn at 11:35 AM No comments:

The horrific death of 70 year old Zithulele Dhlomo, who had resided in the Kennedy Road squatter settlement in Durban for two decades before being incinerated in a shack fire last weekend, has moved his neighbors to action The Centre for Civil Society reports. Community residents joined famed poet Dennis Brutus and other religious and civic notables to demand city services and housing rights.

Squatters say that the municipality stopped providing electricity to the shack communities and thus people are forced to use candles, which often cause shack fires. They are demanding services from the eThekwini municipality.

This is the way good can arise from the ashes of tragedy: through organizing.
Posted by rn at 7:39 AM No comments:

The bad news from South Africa keeps getting worse. This article from the Pretoria News details another round of violence between squatters and police.

Would someone please explain to the ANC government: moving squatters 15 kilometers out of town is objectionable because they would spend all their money commuting and would have no money left to feed themselves and their families. The solution is not eviction, but working with squatters to improve their neighborhoods.
Posted by rn at 7:27 AM 1 comment:

Ghislain Thierry, 25, an electrician who has lived in the building for a year and a half, is originally from Cameroon and has been in France legally for 12 years. Here's his take on the eviction: "I have a decent job and enough money to rent a flat. You'd think I would be able to find a roof over my head without having to live in a squat, but not in France. I experience racism every single day, in every aspect of my life."
Posted by rn at 8:33 AM No comments:

Not exactly related to squatter, but...

this is an earth-shattering event: financial disclosure for all the ministers in the Kenyan government. Of course, the information should also be public, and it should include President Mwai Kibaki. But this small step forward in transparency may loom large in coming years. And if any big-time Kenyan politicians are profiting from huts in the country's squatter areas, this would be the right time for the information to come out.
Posted by rn at 11:53 AM No comments:

the true cause of shack fires 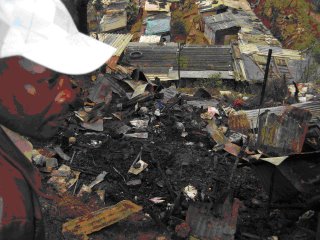 from a press release sent out by Abahlali baseMjondolo, after another slum fire killed a 70 year old man:

These fires are not acts of god. They are a direct consequence of the eThekwini Municipality’s infamous and unconstitutional 2001 decision to suspend the provision of electricity to shack settlement.

S’bu Zikode, President of Abahlali baseMjondolo, said "They tell us that they will clear the slums by 2010 but they won’t tell us what their plan is – where they want to put us and when they want to move us. They will not or cannot show us any programme. While we wait for a promise with no details we are being killed. We seriously condemn this incident. We are saying that the government is responsible for this death. Everyday we are making noise about fire, about the urgent need for water, electricity and toilets, about the need for land and housing in the city. It is not like we are keeping quiet. Everybody knows what is needed but the government just ignores us."

Aguablanca is a squatter community of about 600,000 people in Cali, Colombia. At 3am on June 16th, 900 police officers arrived to smash 1,200 homes in the community. In the melee, a six-month-old child died of exposure to tear gas. A 1 1/2 year old kid was smashed in the head and is still hospitalized. And many families are still living in crude conditions on a nearby roadside.

For what? These kinds of violent forced evictions are among the worst excesses governments can visit on people.

The World Bank offers N25.2 billion ($200 million) to upgrade slums in Lagos. But what is the money for, who will control it, how will it be spent, will the slum-dwellers themselves be involved, will people be able to afford what the World Bank money might produce? Money alone is not the issue.
Posted by rn at 10:39 AM 2 comments: