Cities of the Poor -- a series of radio reports

This week, the World, a production of Public Radio International and the BBC, is visiting the shantytowns of the world. My old friend Armstrong O'Brian Ongera, Jr., from Nairobi, is featured in the first report. You can read and listen to these dispatches from Kenya, South Africa, Peru, India and Brazil at http://www.theworld.org/?q=node/6579. Each broadcast gets posted online after it runs on the show. The entire series should be available by Friday evening.
Posted by rn at 10:15 AM No comments:

Squatters in Lagos had better watch out. I came across this threat against squatters in an article about port development in Lagos, Nigeria in the December 1st issue of African Business:

Government plans to remove informal settlements from port areas have also attracted some criticism but the presence of shanty towns within port bounds is completely incompatible with international shipping standards....

...The government is particularly keen to demolish the informal settlements at the Lagos ports of Apapa, Lagos and Tin Can Island. President Olusegun Obasanjo commented: "There is no reason whatsoever why those people who should not be in the ports, no matter what they claim, should be at the ports. And we will make sure it does not happen. We will not relent on security....On the miscreants and shanties in the ports, I have already given a directive...and it will be carried out."

I'll be in Lagos for several months starting in late January and will see what I can find out about this first-hand.
Posted by rn at 7:36 PM No comments:

In Kibera, a cult leader's rally sparks clashes with the cops

Two people died after a rally held by a former Kenyan cult leader who has political aspirations spun out of control in Kibera. The East African Standard reports (via allafrica.com).
Posted by rn at 6:59 PM No comments:

Developers profit, but do slum-dwellers?

Mumbai's subsidized solution to the spread of shantytowns is to give developers big zoning bonuses in return for their building a small number of tiny (225 square foot) apartments for the displaced families. It's not always a popular tradeoff, as this New York Times business section article admirably demonstrates.
Posted by rn at 9:38 AM No comments:

Nightmare for the Common Man 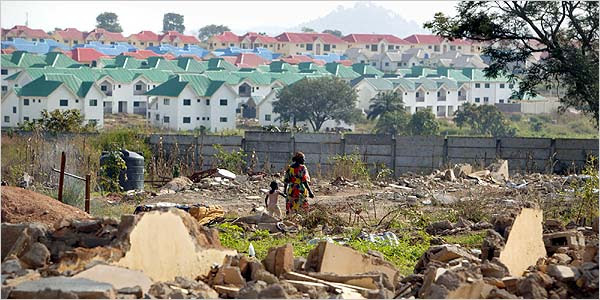 As this picture aptly shows, in Abuja, Nigeria, the city plan is more important than the needs of the people. Lydia Polgreen of The New York Times talks with people whose homes were destroyed by the authorities and finds a "chasm between the tiny, rich and powerful elite and the vast, impoverished majority of the nation’s 130 million people."
Posted by rn at 9:15 AM No comments:

the worst in housing rights

Agence France Presse, 5 December:
Greece, Nigeria and the Philippines were named on Tuesday as the worst offenders for forced evictions and breaches of housing rights by the campaign group Centre on Housing Rights and Evictions. (visit http://www.cohre.org for details)

Unveiling its annual "Housing Rights Violator Awards," the group charged the three countries with "systematic violations of housing rights and (the) continued failure to abide by their international legal obligations."

In the Philippines, hundreds of thousands of people were displaced under government policies of "beautification" and "development," with most of the victims coming from the urban poor, COHRE said.

Infrastructure projects such as rail network redevelopment, and high-prestige events like the ASEAN summit, have been behind many such evictions, with the people in question often relocated to sites with "appalling" living conditions, it added.

Police took part in 79 forced evictions of Roma communities in the first half of 2006, according to the Geneva-based group's Global Survey.

In addition, "the conditions in which these communities live are dehumanising and constitute a grave human rights violation by the Government of Greece," du Plessis said.

In Nigeria, over two million people have been forcibly evicted from their homes since 2000, and the COHRE said the government had "consistently neglected its responsibilites and violated its obligations under international law".

Nigerian civil servants were not safe from the threat of eviction, with 1,388 officials and their families forced by soldiers from high-rise blocks in Lagos in December 2005, as part of a policy to privatise government-owned housing stock.

Jean du Plessis said the seven had displayed "exemplary commitment, courage and perseverance in their struggles for the land and housing rights of hundreds of farmers, workers, residents in China."
Posted by rn at 4:54 PM 1 comment:

Eviction as an olympic event

Beijing will demolish the final 22 squatter "villages" remaining in the city by June as part of efforts to beautify China's capital ahead of the 2008 Olympics, state press said Wednesday.

More than three million square meters (32 million square feet) of "illegal" structures will be destroyed during the campaign, which will focus on areas around the Olympic Village and other Games venues, the Beijing Daily reported.

Following the campaign the city will have "rectified" 171 such "villages" in its efforts to prepare for the Games, the paper said, citing a meeting held Tuesday.

The villages are made up of buildings housing some of the city's huge migrant worker population, a phenomenon that has appeared in cities all across China as the nation undergoes an unprecedented urbanization process.

There were no details about how many people live in the final 22 villages to be destroyed, or the total number who will have been forced to find new homes from all 171 villages.

The report also made no mention of where these people would be moved to.

Officially there are 3.6 million migrant workers living legally in Beijing out of a total population of 15.4 million people.

However, there are no figures on the many other people from rural China who have come to the Chinese capital for work and not registered.

Earlier this year, the city government insisted the legal rights of migrant workers would be protected ahead of the 2008 Olympics, following reports that up to a million people could be evicted to spruce up the city's image.

The defense came amid accusations by overseas human rights groups such as the New York-based Human Rights Watch that Beijing authorities had already embarked on a campaign to close schools serving the children of migrants.
Posted by rn at 4:46 PM No comments:

An article on Rocinha, the largest favela in Rio de Janeiro, by a researcher who's been there, published in The Sun, of Midwest City, Oklahoma.
Posted by rn at 1:02 PM 7 comments: 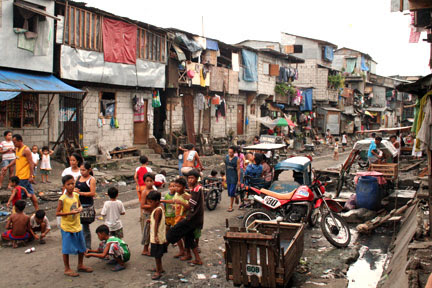 This story from Bulatlat, The Philippines's alternative weekly magazine, details how Tondo, a squatter community that has existed since the 1950s, is in line to be demolished in the drive to privatize the country's ports. The lucky thing is the neighborhood has a history of political activism and organizing. The bad news: 5,000 houses in neighboring barangays (squatter villages) have already been demolished in the past nine months.
Posted by rn at 12:52 PM 1 comment: