air war in the favelas 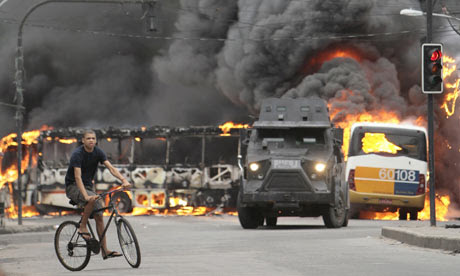 Bandidos in Rio shot down a police helicopter over the Zona Norte favela Morro dos Macacos after police apparently tried to intervene in a battle between two rival drug gangs--Amigos dos Amigos, which controlled the favela, and Comando Vermelho. (The picture here seems to show burnt out buses on the edge of the favela (hint: I don't know of any favelas that have traffic lights.) So far, authorities have said that 12 people have died.

The Guardian has details.

1. "Hundreds of police officers descended on the area following the invasion" by the Comando Vermelho. This is significant because when I was in the favelas (eight years ago, which, I admit, in the fast changing world of the drug traffickers, can be considered ancient history), Amigos dos Amigos was known to be in cahoots with the cops. Indeed, a veteran police officer confirmed this to me. So no one should discount the possibility that the police were taking sides in this fight.

2. The drug gangs have "an increasingly sophisticated arsenal, including anti-aircraft guns and automatic rifles, often sourced from inventory intended for the Bolivian and Argentinian armies and smuggled into Rio." Isn't that a big story? These arms are undoubtedly stolen from official shipments. How can this be happening and isn't there a way for officials--including those in the U.S., which is most likely supplying the weaponry--to prevent it?
Posted by rn at 7:13 PM 5 comments:

the African National Congress vs. The People

Fresh from its victory in the Constitutional Court, Abahlali baseMjondolo now reports that five more of its leaders from the Kennedy Road community in Durban have been arrested. That makes 13 Abahlali members charged with crimes. Meanwhile, no one has been arrested or charged or even implicated in the recent violence that left 2 dead in Kennedy Road.

Now, an article in The Witness suggests a political motive in the attacks and arrests: the Kennedy Road group had pushed for new regulations reining in shebeens (informal bars), which have been open 24 hours a day in Kennedy Road. The community wants these places to close by 10. At the same time, local ANC leaders are irked by the political independence of Kennedy Road and Abahlali, which is a community organizing group and thus does not endorse candidates for office.

The community’s new liquor regulations have angered local shebeen owners who found common cause with powerful ANC branch members who resent the loss of the powerful Kennedy vote bank. This is why the government immediately arrested eight members of Abahlali baseMjondolo a day or two after the attacks. This is why, this past weekend, they arrested another three members of the movement. This is why not a single shebeen owner or militia member has been arrested.

So it's a Nazi-style 'shebeen putsch' by the African National Congress in Kennedy Road.
Posted by rn at 3:59 PM No comments:

Abahlali baseMjondolo has won a major legal victory: The Constitutional Court of South Africa has declared the KwaZulu-Natal Elimination and Prevention of Re-emergence of Slums Act illegal. The Act, cloaked as an attempt to moderate and mitigate bad housing conditions, actually made it easier for the government and owners to evict and eject squatters throughout the province.

You can read the court's judgment here, though oddly, the dissent comes before the controlling decision.
Posted by rn at 12:38 PM No comments: 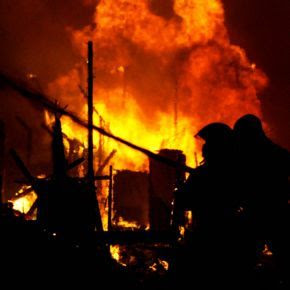 An overnight blaze in a small favela called Diogo Pires, in the western zone of São Paulo, destroyed the entire community, the Associated Press reports.

There's more, in Portuguese, from Folha de São Paulo.
Posted by rn at 12:38 PM No comments:

'a profound disgrace to our democracy'

That's how Ruben Phillip, Anglican Bishop of Natal, characterized the violence against members of Abahlali baseMjondolo that left two people dead and a dozen injured. The Bishop made no bones about where blame lies: with local African National Congress cadres:

"The fact that the police have systematically failed to act against this militia while instead arresting the victims of their violence and destruction is cause for the gravest concern," he said, adding there were "credible claims that this militia has acted with the support of the local ANC structures. This, also, is cause for the most profound concern."

Religious Intelligence has more.
Posted by rn at 11:29 AM No comments:

A fire in 'The Mud,' a mostly Haitian shantytown in the Bahamas, has left 39 people homeless, The Tribune reports.

The Mud and neighbouring Haitian shanty town Pigeon Pea is thought to house around 3,000 Haitian migrants and Haitian Bahamians on an area of land opposite the main port in Marsh Harbour....
The settlements were established around 30 years ago and have been growing without any imposed health and safety regulations....
Many residents have legal status to live and work in the Bahamas....
Random raids orchestrated by the Immigration Department with support from the Royal Bahamas Defence Force attempt to crackdown on the illegal population, but have been shrouded in complaints of brutality....
Residents of the Mud claimed families were separated and residents were beaten, threatened and robbed by officers in the last large-scale raid in July.

This brings up an issue common throughout the world. Migrants, who arrive in a country as economic refugees, are unable to afford legal housing. Most of these people work. Quite a number of them are legal immigrants. But they are forced to live in precarious conditions for years. And then when the predictable fire breaks out, they often are the ones who get blamed.
Posted by rn at 11:17 AM 2 comments:

In the wake of the awful flooding two weeks ago that claimed 300 lives, a Philippine official has argued that 400,000 squatters must be relocated to make the city's drainage better. Agence France Presse has details.

Laguna Lake Development Authority chief Edgardo Manda told AFP, "I have made a strong recommendation to remove these people from the danger zones and not allow them to go back." He asserted that, "the authorities would probably need to erect barricades and station sentries in these areas."

Well, not if the politicians choose to work with the people to come up with appropriate solutions.

What's more, why are squatters the only ones asked to sacrifice. Consider: as the article notes, "chaotic urban planning, or no planning at all, exacerbated the crisis, particularly around Laguna where shantytowns, factories and housing developments have overtaken farms."

So what about the factories and housing developments? Is anyone proposing that they be evicted?
Posted by rn at 10:08 AM No comments:

Supporters of Abahlali baseMjondolo are circulating an important letter to South African President Jacob Zuma. It is designed to push for safety, security, democracy and an impartial investigation into the ethnic cleansing that took place last week in the Kennedy Road shack settlement.

You can read it and sign it here
Posted by rn at 2:56 PM No comments:

Two Portuguese filmmakers have released a documentary about Complexo do Alemao, arguably the most notorious favela in Rio, The Latin American Herald Tribune reports.

"People have a stereotyped image of what a 'favela' is – they’re afraid of anything that comes from there, so our intention was just to eliminate the clichés and let people see the truth," moviemaker Mario Patrocinio said.

The film is scheduled to be released in early 2010, so we all will be able to judge for ourselves.
Posted by rn at 11:35 AM No comments:

The metropolis of Accra seems poised to evict squatters in the communities of Sodom and Gomorrah and to push out the traders at Agbogbloshie market, the Joy newpspaer and Peace FM report.

Here's a doozie: while giving lip service to the human rights of squatters to live in better conditions, Alfred Okoe Vanderpuije, head of the Accra Metropolitan Assembly, told reporters that he is "in negotiations with the Electricity Company of Ghana, Ghana Water Company and other utility providers to halt the provision of their services to the slum."

So, in order to have them live better, he will cut off their water and electricity.

Let's call this two-faced approach what it is: duplicity.

Remember, this is the same politician who said in prior articles that there were plenty of vacant apartments that the squatters could rent in Accra.

The government is also pushing merchants at the local market further out of town, according to another article from Peace FM.
Posted by rn at 12:02 PM 2 comments: