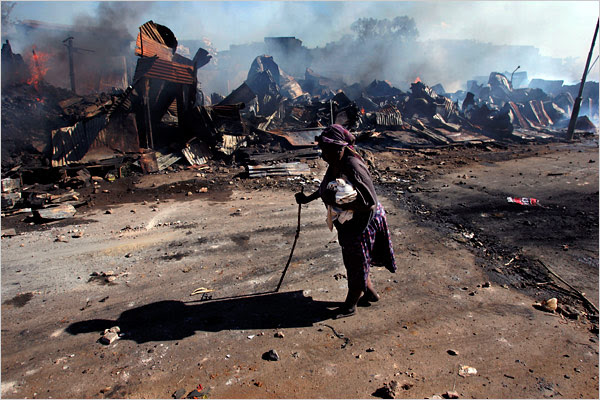 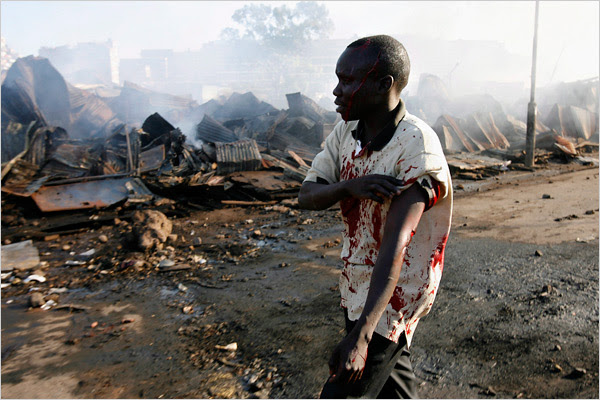 If Kenya's incumbent president, Mwai Kibaki, did not rig the election, asks challenger Raila Odinga, "why does he seclude himself in State House at dusk to be sworn in without the media, diplomats, observers and other Heads of States." For those who don't know the details, Odinga was leading in the polls in the lead up to the election, and was ahead by 1 million in the count just one day before the official results were announced. Once the election commission announced th results, the incumbent president was sworn in for a second term in a secretive 15-minute action and the government immediately imposed controls on the press.

The danger for Kenya is that the contested results, which outside observers said were tainted by fraud, exacerbate existing tribal tension. Kibaki is a Kikuyu, the dominant Kenyan tribe. Odinga is from the nation's second-largest tribe, the Luo. Kibera, the shantytown where I lived when I was doing the reporting for Shadow Cities, is in Odinga's parliamentary district and reports are that violence has broken out between Kikuyus and Luos in the community. Other shantytowns around Nairobi report riots and anger. The two photos, from The New York Times, show the extent of devastation in Mathare, Nairobi's second-largest shantytown.

You can view a disturbing video from the British newspaper The Guardian here.

The Nation, the country's largest newspaper, has details of Odinga's plans to contest the results.

****
later in the day update: The New York Times offers a New Years Eve view of the situation on the streets.

As the Times points out, "Mr. Kibaki now faces trouble not just on the streets, but in the Kenyan Parliament as well. More than half of his cabinet was voted out of office in a wave of seeming dissatisfaction with his government, and his party won about 35 seats in Parliament, while the opposition took nearly 100 seats."

This brings up an interesting issue: if we are to believe the results certified by the Election Commission, we have to believe that an overwhelming number of people split their ballots. If 100 opposition politicians were elected to Parliament and half of Kibaki's cabinet lost their parliamentary posts, is it truly credible that so many people voted against Kibaki's party's nominees for Parliament but for the incumbent president?
Posted by rn at 10:25 AM No comments:

Johannesburg squatters take little interest in the current fight between Jacob Zuma and Thabo Mbeki for leadership of the African National Congress. "The ANC has done nothing for us," one squatter tellsReuters.

The article notes that people expected investment and empowerment after the ANC took control of the government, but 13 years later, there's not much to show for majority rule. "We can't even get a toilet, unless we can afford to bribe the authorities," another squatter said.
Posted by rn at 7:50 AM No comments:

The dark side of micro-credit?

Are small-scale loans from Grameen Bank and other micro-credit institutions being used to fund dowry payments? That's the provocative assertion in this essay from openDemocracy: "While micro-credit has benefited large sections of the rural population in many ways, it has also worked against women's solidarity and contributed heavily to the inflation of dowry. Grooms' families are aware that money is available to brides' families more easily now, through Grameen Bank, the Bangladesh Rural Advancement Committee (BRAC) or other NGOs."
Posted by rn at 8:18 PM No comments:

what's the world record for evictions?

Maybe China takes the gold, for evicting 1.5 million people to make way for next summer's Olympics in Beijing, according to the Committee on Housing Rights and Evictions. The AP has the details. COHRE gives Beijing, Slovakia and State Peace and Development Council of Burma its annual Housing Rights Violator Awards. Read COHRE's citations here.
Posted by rn at 12:21 PM No comments:

Subtopia, Bryan Finoki's revelatory blog on military urbanism, features a thoughtful post on one artist's digitally manipulated photos from the favelas, or what Bryan calls Squatter Imaginaries. Join the discussion about the role of art in revealing/questioning/documenting social fractures.
Posted by rn at 8:20 AM 6 comments: