House in a Slum? You Can't Afford It. - washingtonpost.com

Dilip D'Souza decodes Mumbai's mystifying housing market and the programs designed to aid squatters in this wonderfully honest article from The Washington Post.
Posted by rn at 7:04 PM 4 comments:

I missed this in late December: Squatters in Bangalore, who had occupied their community for two decades, protested after the municipality evicted them with no warning. They claim that the city sold off replacement housing rather than allocated it to them. The Hindu has details.
Posted by rn at 6:58 AM 3 comments:

A sophisticated strategy in Manila

Philippine squatters have picketed the South Korean embassy, to protest a South Korean government-financed plan that calls for 50,000 families who live along the railroad tracks to be evicted. Manila's INQUIRER newspaper has the details. Sadly, the Korean Embassy refused to talk with the squatters or even receive a letter they were trying to deliver. The squatters say they're not against improving the railroad, but they want their rights to their homes respected and relocation plans to be developed. "Our only concern is the observance of the rights of the affected families," said Ted Añana, deputy coordinator of the Urban Poor Associates, which helped organize the demonstration.
Posted by rn at 8:20 AM No comments:

35 years and still no rights

The squatter community of Arnett Drive has been in the Reservoir Hills area of Durban for 35 years. Yet the municipality has launched a sudden and horrible eviction drive. It's an ugly reality of the new South Africa -- majority rule making life worse for the majority.

Update: A January 25 article from The Mercury (sadly hidden behind a subscription firewall on the web) reports that Abahlali baseMjondolo, the courageous Durban squatter organizing group, won a temporary injunction barring the municipality from engaging in more demolitions in this Reservoir Hills community. The interim ruling allows for a one-month reprieve. The matter will be back in court on the 21st of February.
Posted by rn at 10:41 AM 7 comments:

A big year for the wrecking ball

This excellent article from Canada's Globe and Mail newspaper notes that governments in Mumbai, India and Istanbul, Turkey are set to demolish millions of squatter homes to make way for highrises, in a misguided attempt to modernize their cities.

In both cities, it seems like the government is using the rhetoric of improvement and redevelopment to shift land from being held by largely poor squatters to being owned by large real estate establishments. The impact on the squatters, it seems, is just collateral damage (see photo of Nehru Nagar in Mumbai).

Yet the article offers a modest way forward:

"The best plans generally let the slum dwellers themselves make the main decisions in planning their future. You should provide clean water, toilets, electricity, garbage collection and disposal, and maybe let people build their own houses if they can using materials that you can provide," says Aprodicio Laquian, the Filipino-Canadian planner who practically invented the idea of slum-dweller-designed urban rehabilitation in the 1960s and is now at the University of British Columbia.

"Eventually," Mr. Laquian says, "you want to make available a better sort of housing, a five-storey walk-up apartment, but planned according to the needs of the community, not by some central plan."

An amazing and simple statement of what ought to be the norm in urban development. Instead, it's a revolutionary thought. How many people need to get evicted before the world understands?
Posted by rn at 5:12 PM 8 comments:

gypsies face the boot in Istanbul

Another example of eviction via redevelopment. Istanbul wants to spruce up for its 2010 debutante outing as "European Capital of Culture" by flattening the ancient and historic (and, admittedly, run down) area called Sulukule, which is occupied principally by the Roma. The plan calls for removing the historic homes on the land abutting the 1600-year-old Theodosian Walls and building $77,000 townhouses. "We are buying the houses from the present owners and they can move into brand-new lodgings as soon as they are finished, and pay off the difference over 15 years," the local Mayor crows.

But Sukru Punduk, a Sulukule resident who opposes the plan, thinks the municipality’s aim is to clear the area of its current Roma inhabitants. "Look at the models they’ve made of the new houses, little model people carrying laptops, middle-class people, not people like us," he says. It's a logical suspicion, considering that half the residents of Sulukule earn less than 500 lira ($427) a month.

Oh, wait, perhaps Countrywide Financial and Citibank can come in and give these good Turkish citizens some no documentation subprime mortgage love, then foreclose on them and ....

What's even more suspicious is that the government is also seeking to destroy nearby Gulsuyu, a former gecekondu (squatter) neighborhood that was legalized two decades ago. Why push Gulsuyu residents out? Because that neighborhood occupies a potentially prime piece of real estate high on a hill overlooking the Marmara Sea.

Eurasianet has the sordid details.
Posted by rn at 4:00 PM No comments:

the new shantytown of people forced out of the shantytown 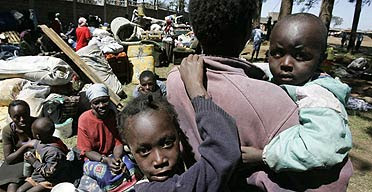 The post-election violence in Nairobi has pitted neighbor against neighbor. These former residents of Mathare, a shantytown with a history that goes back more than half a century, on the were forced from their homes and have become squatters on the nearby airforce base (photo from guardian.co.uk).

Friends tell me that several swathes of Kibera were burnt, but they were hoping tensions would cool this weekend.

This much is sure: beyond finding a political solution, there's lots of mending to be done between neighbors.
Posted by rn at 6:50 AM 3 comments: