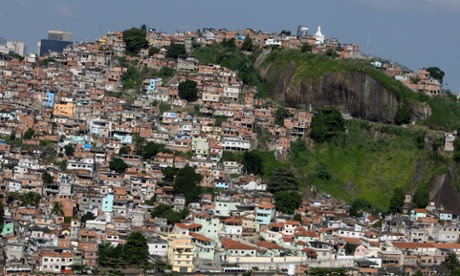 This thought-piece on the favelas of Rio de Janeiro, from The Guardian, manages to get it both wrong and right.

The writer, Simon Jenkins, correctly notes that "the essence of the favela sovereignty is local ownership." And he clearly gets the surreal nature of the cable cars, complete with white-gloved attendants, that the city installed over violence plagued Complexo do Alemao. How strange, then, that he doesn't quote a single favela resident -- despite the fact that one of every five people he passes every day lives in a favela.

In the same spirit, it's odd to find a picture of a normal young woman and her baby 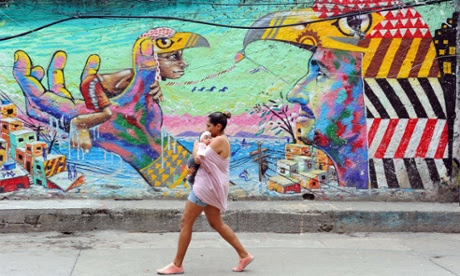 walking in front of a colorful mural on an otherwise empty street, captioned "Life in the Cantagalo favela" -- as if it's bizarre and amazing to simply walk down the street.

What's more, as one of the commenters on the article points out, when Jenkins suggests that the so-called pacification program, which started in 2008, "rightly acknowledged that lasting improvements of favela living conditions required government control of law and order," he ignores the history of community-led improvements that have been made over the years and the fact that, for most favela dwellers, the police never have been a positive influence. Indeed, they've been responsible for lots of violence and killings over the years.

Similarly, when he suggests that "there has to be a compromise between gentrification and stasis. Somewhere in a freer property market lie the resources to update these places," he ignores the immense amount of resources that people already have invested. They built their homes -- building and rebuilding and rebuilding again over decades. They brought water and electricity -- stealing these essentials at first, sure, but making the investment to pipe and wire their communities and homes. Freedom to develop in the manner that Jenkins seems to advocate somehow always comes to mean freedom to evict. It's a nasty business -- and favela dwellers are quite understandably anxious about losing their homes. (I don't live in a favela, but I certainly was anxious when my landlord tried to evict me.) Besides, there's already a property market in the favelas -- people buy and sell homes all the time -- and it hasn't brought the Nirvana that Jenkins hopes for.

Jenkins is right that most of us who write about or study the favelas don't get sewers built. But this is an issue of local organizing. I have argued for almost a decade now that sewers are secure tenure, that organizing for infrastructure is a hugely important strand of a strategy for the future. But organizing doesn't come from the outside. Brazil's favelados spent decades remaining under the radar because they were afraid that powerful political and development interests would conspire to push them out. Now, as those same interests are using the excuse of the World Cup and the Olympics to wage war on them, they have to learn how to emerge. This is a difficult process, and it is happening in the most dire of times.
Posted by rn at 9:26 PM 2 comments:

brazil wages war against 20% of its people

bit.ly/1iwX9dd (the perils of having several blogs....sometimes you forget where you're posting.)
Posted by rn at 12:43 PM No comments:

Between Scotland and Brazil, you get the picture: sports is an excuse for displacement.

The Guardian offers a successful cautionary tale from Glasgow, which proposed imploding five  blocks of Red Road, a 60's era apartment development, as part of the opening ceremonies to the Commonwealth Games. Read the comments for the true outrage the article lacks: "the demolition of the Red Road flats is just part of the wider annihilation of social housing in Glasgow. The eight transformational regeneration areas (TRA’s) in the city, for instance, will see the demolition of 11,000 GHA (Glasgow Housing Association) homes. these will be replaced by 6,500 private homes and a dismal 500 social homes. an astonishing loss of 10,500 social homes in just one regen programme! (not even including Red Road).” If this is what First Minister Alex Salmond envisions for Scotland as an independent nation, it's a pretty sorry sight.

Meanwhile, The New York Times opens our eyes to the myriad desolate and decaying projects Brazil's government has pushed over the past decade. Unsaid in the article is the accusation that, despite evictions and dislocations and war against its residents in Rio de Janeiro, Brazil is way behind on its construction obligations for the World Cup. From the article: Back in 2007, when the deal was cut, then president Luiz Inacio Lula da Silva said the World Cup stadiums would be financed mostly by private companies, but today it's known that public funds are behind the vast majority of them, either through loans or tax breaks." And the government is continuing to evict people from favelas.
Posted by rn at 9:45 PM No comments:

So who says Brazil is a post-racial society? IPS adds its voice to the reporting on the phenomenon of young people from the favelas who gather in flash mobs at Brazil's fancy shopping malls. Mall security officers and police have used rubber bullets and pepper spray to attack the groups--and some participants and officials suggest that the violent response has revealed racial cracks in Brazilian society. In their view, the mostly-white elites who shop at the malls are afraid of largely Afro-Brazilian favela dwellers. Author and Green Party Activist Fernando Gabeira initially saw the rolezinhos as attempts to "democratise the space for whoever wanted to enjoy the beauty of the shopping centres." Now, however, he sees them as more political--and perhaps a response to the luxurification of many Brazilian cities in the run-up to the World Cup and the Olympics.
Posted by rn at 8:27 PM No comments: 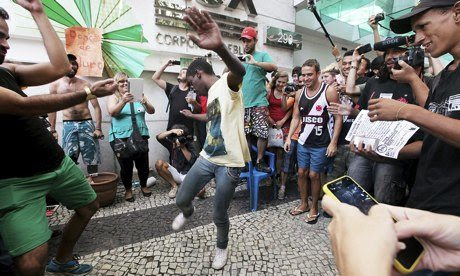 Brazil has, in recent years, reduced poverty, mostly through a system of cash payments known as the bolsa familia. Still, the elite and the authorities have got to understand that more must be done--including true social acceptance and integration. As one activist told the Guardian, "The movement aims to denounce inequality and open opportunities for the poor to come to places like this. It's not about stealing or destroying, it's about getting back to the idea of having fun."
Posted by rn at 9:55 PM 1 comment:

IPS has posted a new article about tensions between the Nubians and people from other tribes about land in Kibera. But the article buries the real scandal.

Toward the bottom of the article, human rights activist Felix Omondi, of the group Bunge la Wananchi (the People's Parliament), tells the new service, "In September 2013, Lands Minister Charity Ngilu said that land in Kisumu Ndogo, Gatwekera, Laini Saba and Kianda [four of the 13 major neighborhoods of Kibera] has already been sold. Nobody knows who owns this land."

Indeed, when I was living there, ten years back, there were tales of sales to members of Parliament and their families and, certainly, many structures were owned by outsiders. And the Nubians, Kikuyus and Luos who lived in Kibera were contesting the space.

Still, if there's going to be a deal about land in Kibera, it should have two principles. First, the land should wind up in the hands of the people who are truly living there. Not outsiders, certainly not the rich, and not those with historic claims who have either moved away or sold off their stakes. And second, everything should be done transparently, so the rumors of sales and outraged claims that "nobody knows who owns this land" will be gone forever.
Posted by rn at 9:02 AM No comments:

evictions continue in the Kenyan capital

Amnesty International's report on forced evictions in Nairobi was largely lost in the coverage of the horror of the Westgate attack and follow-up reports detailing how Kenyan security forces looted stores in the damaged mall.

While that may be an understandable news judgement, it's worth noting that Amnesty has documented 9 cases of forced eviction in the Kenyan capital in the past two years. Eviction seems to be quasi-official government policy in Nairobi.
Posted by rn at 2:20 PM No comments: