good for goats, bad for people 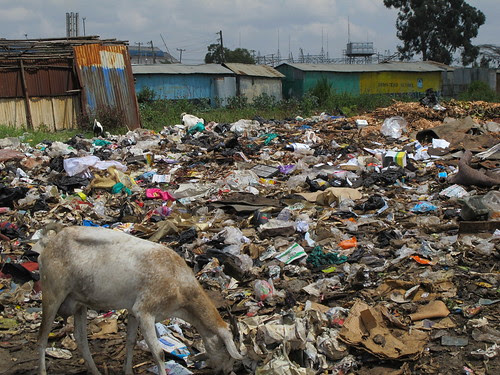 Count 80,000 people homeless and a bunch of goats happy after Kyang’ombe, a squatter community near Jomo Kenyatta International Airport, in Nairobi, was demolished last week. The airport authority suggests that the neighborhood was dangerously near runways and in the flight path of many planes. But Muungano Wa Wanavijiji, a squatter federation and advocacy group, has suggested that the real impetus for the eviction, which started at around midnight on Friday, was that politically connected developers had taken control of the land.
Posted by rn at 10:14 AM No comments:

I will try to avoid posting too many plugs for my new book on this blog. But I can't resist popping this one up: Today, the National Public Radio show Fresh Air discovers the informal economy.
Posted by rn at 1:01 PM 3 comments:

crossposted from my blog Stealth of Nations

Stealth of Nations, the book, hits the stores tomorrow. On Saturday, the The Wall Street Journal reviewed it. And you can get a taste of what's inside the covers on Bloomberg View.
Posted by rn at 3:35 PM No comments:

Britain's conservative government wants to tilt the nation's laws against squatters, The New York Times reports. But at what cost. While some landlords may find ejecting squatters legally a cumbersome process, the article also notes that "Housing advocates say there are an estimated 762,000 empty and abandoned properties in Britain that would actually benefit by having tenants. And with homelessness likely to increase in the next few years, as deep cuts in housing allowances for welfare recipients take affect, advocates say it would make sense to match tenantless homes with homeless tenants

After all, as one housing lawyer told the paper, squatting is hard work and most people are serious about needing a home. “Most squatters who are actually looking for a place to live are doing it on entirely rational grounds, and not looking for somewhere where there’s a homeowner likely to turn up at any moment,” that attorney, Giles Peaker, said. “They’re looking for something that’s long-term vacant, where the owner has dropped the ball."
Posted by rn at 3:56 PM 2 comments: