doctors without borders in the favelas 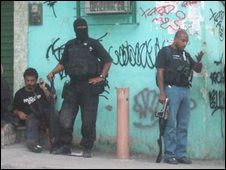 The excellent NGO Doctors Without Borders (aka Medecins Sans Frontieres) is now working in the famous Complexo do Alemao in Rio de Janeiro, the BBC reports. The group has won the approval of local health authorities to set up shop in the embattled Zona Norte community, which has long been one of the most violent in Rio. The medical group is offering psychological counseling to residents who have lived through gun battles.

Talk therapy, of course, is not structural change. It does nothing to confront the fact that most favela residents are caught between two powerful and heavily armed gangs: the drug traffickers and the police. And it remains unclear if the MSF is also offering medical services in the favela, or whether its efforts only involve counseling. But it is an important first step.

UPDATE: MSF informs me that its doctors provide emergency medical care in Complexo do Alemão. According to the group's activity report, its clinic conducted more than 11,000 consultations in 2008. This is terrific news (and thanks to Pete Masters for sending it my way.)
Posted by rn at 1:36 PM

The doctor really brave to be there. Nice post!.

Hi, my name's Pete and I work for MSFR - just came across your post and thought I'd mention that we do also do medical work in Complexo do Alemao - according to our activity report for last year only MSF ambulances can get around the favelas... Thanks for the post...

Hello,
Thanks for the interest in our initiative. I am one the psychologists working in this project. For more information check on this article published the same week.
http://edition.cnn.com/2009/HEALTH/09/04/mental.health.brazil/index.html

In fact the reach of mental health can be understood as localized in the individual and distant from structural change, nevertheless it´s powerful to witness that the good effects of psychotherapy in a subject changes also the world aroud one.

Thanks, Douglas. Please keep us posted on what's going on in Complexo do Alemão if you can. It's important to have first-hand info. The newspapers, as I'm sure you know, can be unbelievably biased.

hey MSF guys,
I'm just wondering if there would be any opportunity to do a med student placement in this Clinic in Brazil. I would be a 3rd year student at the time (Oct/Nov 2010- for 8 weeks), from Australia.
Thanks for any help
Ellie

I'd recommend you contact MSF directly. Go to http://www.msf.org/ and, if you whip around the site a bit, I'm sure you can find a way to contact them. If you speak Portuguese, you can also find the group's Brazil homepage at http://www.msf.org.br/mhome.asp

Very inspiring! I have heard of the same stories in Cambodia and in Vietnam as well! They are truly heroic and I hope they serve as huge examples of being the "change" that we have been looking for! Thanks for this post!