no room for refugees? 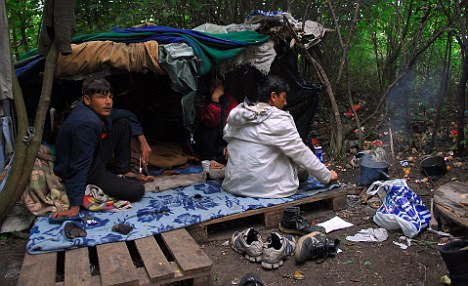 Just what does it mean to call an eviction ‘an open and first rate operation’? That's the question I'd ask French Immigration Minister Eric Besson who told The Daily Mail that the government will destroy "the jungle," an improvised shantytown of refugees near Calais.

The French government seems to be demonizing the refugees. The tragic fact that an Afghan people smuggler raped a Canadian journalist last summer should move the government to catch and prosecute the perpetrator and to crack down on human smuggling. But this one horrible crime doesn't mean all the 1,000 refugees camped out in the woods around Calais are rapists. And, as the article notes, 'the jungle' only exists because then Interior Minister Nicolas Sarkozy shut down a local red cross center in 2002.
Posted by rn at 10:49 AM

great to be here and got something we people don't know.Can i be in your blog if you are interested.Review my blog.

rn
I spent most of the past four years hanging out with street hawkers, smugglers, and sub-rosa import/export firms to write Stealth of Nations, a book that chronicles the global growth of System D--the parallel economic arena that today accounts for half the jobs on the planet. Prior to that, I lived in squatter communities across four continents to write Shadow Cities, a book that attempts to humanize these vibrant, energetic, and horribly misunderstood communities. My articles on cities, politics, and economic issues have appeared in many publications, including Harper's, Scientific American, Forbes, Fortune, The Nation, The New York Times, The Washington Post, Metropolis, and City Limits. Before becoming a reporter, I worked as a community organizer and studied philosophy. I live in New York City and do most of my writing on manual typewriters.