Out of sight, out of home 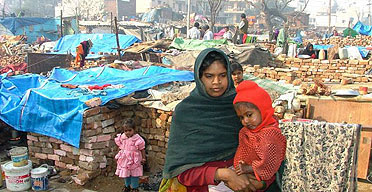 For the majority in Delhi, the Indian capital, new malls and hotels rising on the city's periphery are not signs of hope. They're indicators of eviction. The Guardian's Randeep Ramesh reports on how the city's supposed renewal plans are bulldozing the homes of the poor.

"The problem for Delhi is huge because 32% live in jhuggies (slums)," an activist says. "How can you just bulldoze. Where will they put all the millions of people? What about their rights?"

Still, the report continues, groups that can develop political swat can block demolitions: "Unlike the poor, powerful groups can mobilise to bring the government to heel. A recent attempt to seal thousands of illegal shops was halted by a coalition of traders who could vote the Congress party out of power in the Delhi municipality."

If squatters represent 1/3 of the population, how come their don't have political power? A serious question for the world's largest democracy.

[Thanks to e-tat for alerting me to the article]
Posted by rn at 9:50 AM

The poor have not organised or been organised effectively. They are criss-crossed by other identities such as language, caste, religion that mean their votes rarely coalese to reflct their size.

The problem in that respect is leadership rather than democracy in India.

I am a senior at Princeton University writing a thesis called "The Rise of Squatter Movements: A Case Study of Crimean Tatars."
I was wondering whether you are aware of any mathematical models depicting/predicting the spread of squatting. For instance, in your book, you mention that by 2030 there will be 2 billions squatters. Could you please tell me where you got this estimate?

I will be very grateful for any information.

You can reach me at amykhayl@princeton.edu

rn
I spent most of the past four years hanging out with street hawkers, smugglers, and sub-rosa import/export firms to write Stealth of Nations, a book that chronicles the global growth of System D--the parallel economic arena that today accounts for half the jobs on the planet. Prior to that, I lived in squatter communities across four continents to write Shadow Cities, a book that attempts to humanize these vibrant, energetic, and horribly misunderstood communities. My articles on cities, politics, and economic issues have appeared in many publications, including Harper's, Scientific American, Forbes, Fortune, The Nation, The New York Times, The Washington Post, Metropolis, and City Limits. Before becoming a reporter, I worked as a community organizer and studied philosophy. I live in New York City and do most of my writing on manual typewriters.