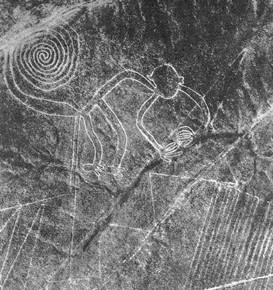 Hundreds of squatters have erected new shacks on archeologically important spots in southern Peru, Peru This Week reports (based on an earlier article in the Peruvian paper El Comercio). The new settlements, which were built with the support of local politicos, have apparently endangered portions of the Nazca lines, the 1500-year-old geoglyphs that were created by an ancient Peruvian culture. The Nazca lines were designated a UNESCO World Heritage site in 1994.

Preservation of archeological sites is crucial for greater understanding of our origins and history. Nonetheless, this land invasion shows how desperate people are for a place to live. The political structure and property-owning system conspire to deny people a right to a place to call home. As a result, people often seize the most readily available land where they will be least likely to be immediately displaced--tracts with disputed titles, parcels in dangerous locations, or properties that have been removed from private development because of other concerns--in this case the need for preservation of the archeological record.

If the towns in the Nazca region would allocate other parcels for the squatters, they wouldn't have to obliterate the geoglyphs.
Posted by rn at 10:35 AM

I'm a reporter for IstoÉ Magazine, one of Brazil's largest weekly magazines. We came across your "Stealth of Nations: The Global Rise of the Informal Economy" book and became quite interested. Are you available for phone interviews? Is there an e-mail we could speak through?

Hope to hear from you soon.