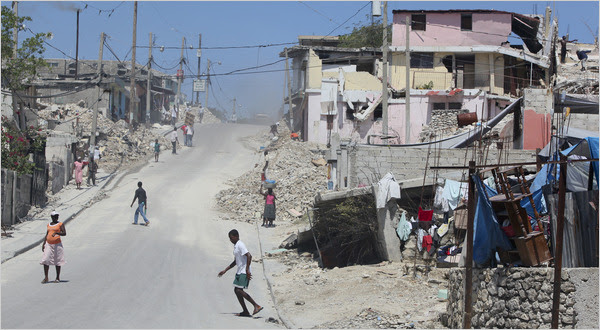 As this New York Times article makes clear, many who were previously not squatters now are and will be for for the foreseeable future in the Haitian capital of Port-au-Prince.

And its not just residents like Ginette Lemazor and her family, who, the article notes, live "in a flimsy structure fashioned from plastic sheeting and salvaged wood. They have a bed — “Please, make yourself at home,” she said, pointing to it — and a chair." Schools are operating under tarps. Impromptu latrines are so full that people are invading half-wrecked houses to use their toilets. And one thought unites everyone: the government doesn't communicate (except to falsely promise supplies) and is doing nothing. Indeed, in a recent interview, President René Préval, rather than speaking about rebuilding, promised there would be more earthquakes.

There's hope, however, in the words and actions of this man:

"Jean-Claude Gouboth, 36, the leader of a small encampment on the grounds of an old villa, said he had ignored the president’s remarks “because the president ignores me.” Mr. Gouboth has already rebuilt his small convenience store with wood from inside his heavily damaged house. “You have to face the facts and recoup,” he said. “Nobody’s going to do anything for you."
Posted by rn at 6:20 AM

I am a reporter for G1, the news portal of the largest media group in Brazil (Globo Network). I am currently living in NYC, where I am researching for a special report that will become a book about the international image of Brazil. I am trying to understand what the americans think of our country, and how important it is to us.

I would like to interview you for this project, concerning you research on Brazilian urban landscape and our slums. It would be great if we could meet to do this interview.

looking forward to hearing from you soon

You've spent a lot of time talking about how people are moving "up" into squatter cities. I'm wondering what your perspective is on people moving "down."

This piece from Haiti is a great example. Also, this is something we're seeing in the US in places like Hopeville near St Louis.

PS. I have taken a lot away from reading your books/blog. Thank you very much for your hard work and important perspective.

Many thanks. Where can I find out more about the people of Hopeville. Where did they come from? Are some working? Etc.

The fact that the city's response to the creation of this squatter village is to evict people and offer them a place in a shelter is a sad commentary about the lack of resources and tools and support in our communities.

Despite the name Hopeville, moving 'down', as you put it, is generally a response to something bad. A natural disaster. An eviction. A fire. The lack of housing people can afford. So the existence of these squatter communities is clouded by the lack of alternatives people have after facing a difficult situation.

Moving 'up' is more clearly an act of aspiration.

I discovered Hopeville by googling "hooverville" and searching for the latest news. I'd heard some NPR reports over the past few years about tent cities that had been expanding due to the financial crisis and recession. I hadn't heard much of them lately, so I googled the latest news. This BBC report seems to be a central part of what people had been responding to...

To learn more about Hopeville I would contact this reporter or Larry Rice.

Obviously, this is a very different scenario to the squatter cities in the developing world. After reading that second article, though, I think there are a lot of overlaps. Mainly, that the community building is being disrupted by uncertainty.

The aspiration vs. desperation is a very important distinction, but they seem to share the general sense of transition. From my (limited) perspective, it seems that these places are initially perceived as zones of transition, from Nairobi, to the Haitian refugees, to Hopeville. Am I wrong? That people initially move there with the idea of change, good or bad, forced or freely-chosen. Community is organically created, but the outside perspective remains one of transition.

Hi!We think about translating your book (Shadow Cities) about squating on russian. can you give me your e-mail (or write me on newbookcons@gmail.com), to discuss some items. Thanx