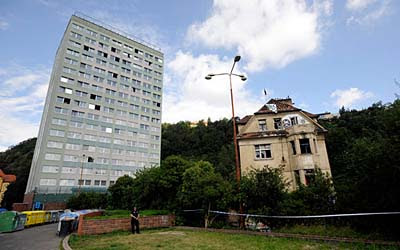 It's also a great irony that it was a government agency -- the the Institution for Information on Education -- that hired private security guards to push the squatters out. the Czech Republic's Human Rights Minister, Michal Kocáb, intervened to relocate the squatters into a privately owned building downtown, but the last four older residents of that partially occupied building fear that this is a move by the landlord to drive them out -- details at Ceske Noviny
Posted by rn at 12:13 PM

The prague squatters have a website worth visiting: http://squat.net/praha/ .

i, these squatters took over a building today on Na Slupi, Prague 2. http://blog.rorywilmer.com/?p=797

Thanks, Rory. Keep us updated!