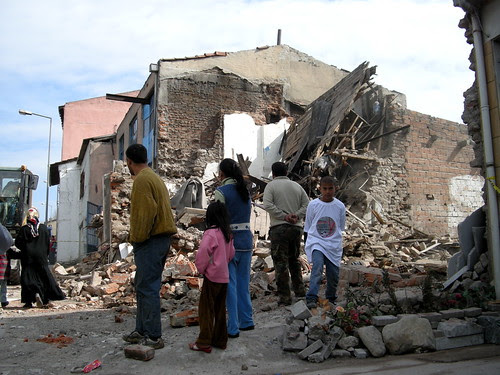 Kristoffer Larsen, who is currently in Istanbul, is chronicling the municipal government's continuing effort to demolish Sulukule, a historic neighborhood in Istanbul that has been home to a Roma community for almost 1,000 years. He writes:

"They are tearing down houses randomly - 6 one morning - 3 the other day. The last week has been quiet - there are rumors among some people that the municipality are getting cold feet - but this is not confirmed. They are likely to carry on - despite the fact that no solution has been found for huge number of residents who are not able to pay for new houses.

There has been a desperate atmosphere some days - one lady started to destroy her own house (in which she has been living for 40 years, her whole life) because she knew that the buldozers would come the next morning."

Kristoffer took the photo last month, after one of the periodic demolitions.

On April 4, members of the US Helsinki Commission wrote to Turkey's Prime Minister R. Tayyip Erdoğan, expressing dismay over the organized bulldozing of the community. In a speech last month, however, Erdoğan was unapologetic: "Those criticizing the project will eventually say, 'We thank you for rescuing Sulukule from its ugliness and turning it into a modern place with restored historical streets.'"
Posted by rn at 11:10 AM