my god martha, they're stealing electricity! 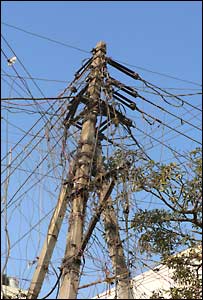 One of the sad facts of life as a squatter is that it's extremely difficult to get legal electrical service. Though this BBC NEWS article begins by pointing the finger at squatters in India's capital, a power company official says that the firm actually loses more money from middle class Delhi residents who tamper with their meters that it does from unauthorized squatter hook-ups.

I applaud Tata power for offering a flat rate for squatters to be able to get legal electricity, but 179 rupees a month is expensive for many squatters, particularly if it will only power a light bulb and a fan. I knew Mumbai squatters who worked two jobs and earned as little as 800 rupees a month. How can that family justify paying more than 20% of their income for electricity?
Posted by rn at 7:13 AM