The Great Water Rip Off

More proof (if more proof is needed) that people in Kibera are being ripped off, and possibly sickened by the way water is distributed. Inter Press Service reports that a new study shows that Kibera residents people in informal settlements pay about eight times more for water than those living in wealthier areas.

Of course this has been known for years. As I wrote in Shadow Cities, A World Bank Water & Sanitation Project study done more than four years ago proved the same thing.

IPS reports that the Nairobi Water Company has invited water kiosk owners in Kibera to join the system legally. They have, of course, resisted because of the high profits they make retailing water. Daniel Makau, one of the water vendors, told IPS he makes between $58 and $72 a month selling water. Truly big bucks, considering that most Kibera residents I knew earned between $30 and $40 a month.
Posted by rn at 11:54 AM 6 comments:

A court ruling in Johannesburg gives the city the right to evict squatters from buildings it deems unsafe, the Johannesburg News Agency reports.

The Supreme Court of Appeal decision allows the government to evict approximately 300 people from six buildings in the inner city that it argues are unsafe and unhealthy. The court ruling does, however, require the city to provide temporary relocation housing for the people it evicts.

The question of course is this: speculators have long used allegations that buildings are unsafe or dangerous to push low income people out. City officials have often colluded in those actions. Why not require the city to make the buildings habitable and fix violations rather than summarily ejecting the residents?
Posted by rn at 4:31 AM 3 comments:

President Ellen Johnson-Sirleaf has given squatters under Monrovia's Gabriel Tucker Bridge a week to prepare for their eviction, according to this dispatch from The Analyst newspaper.

Public Works Minister Lusinee Donzo says the squatters must be pushed out because they have been dredging sand from under the bridge.

Of course, wouldn't it be easier to simply make a deal with the squatters not to mine sand from under the bridge, if that's the key problem.

The government has pledged to assist the squatters -- but did not disclose what kind of assistance will be provided.

The eviction of these squatters is part of a larger city effort to drive out all illegal occupants, officials said.

Sounds like more Muramtatsvina to me.
Posted by rn at 4:20 AM No comments:

a whole new level of justice

Alternative dispute resolution in Dharavi. A number of women's groups around Mumbai have started their own version of 'courts,' with encouraging results. It's good to see the police are now committed to this.
Posted by rn at 4:08 PM 2 comments:

Zambia gets the demolition bug

The government of Zambia has decided to demolish all shantytowns. These communities, it so happens, are also where the opposition draws its support. The horror continues. Isn't there a difference between squatter settlements and well-off people who have grabbed government land for their own gain. And where will the dislocated people go? Reuters and the Times of Zambiahave details.

[thanks to Gabe for alerting me to this story]
Posted by rn at 3:31 PM 2 comments: 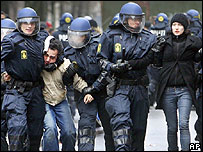 Squatters in Copenhagen, who have occupied their building for 25 years only to have it sold out from under them by the City Council, clashed with police enforcing an eviction order. It was a paramilitary operation and cops arrested 30 squatters after dropping from helicopters to the roof of the building. The BBC has details.

[thanks to Andrea for the alerting me to the story]
Posted by rn at 3:00 AM 8 comments: