'living on Chiney man land until him decide fi run we'

That's the desperate situation of squatters in Jamaica. With a close-to 50 percent increase in the number of families living as squatters over the past decade, the government is turning punitive. Dr Morais Guy, minister without portfolio in the Ministry of Transport, Works and Housing, says the government is proposing to implement a modern trespass act to replace the permissive 160-year-old law that dates to the end of slavery.

The Gleaner reports on the difficult situation of several squatters in Rasta City, a shack community in Clarendon.

Question for the government: if more and more people are becoming squatters, how do you expect turning them into criminals will help?
Posted by rn at 6:09 AM 1 comment: 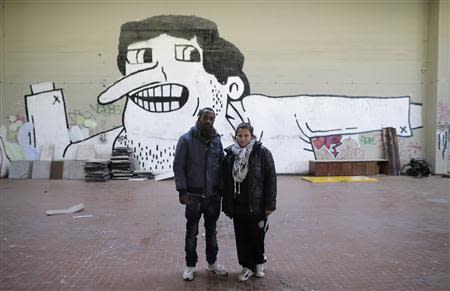 According to government statistics, there are 2,850 squatter-occupied buildings in Rome. Reuters reports on one, a former public archives building which is now occupied by 140 families. Mariangela Schiena and her boyfriend
Henok Mulugeta moved in six months ago, after they lost their retail jobs. Unemployment among young people has passed 35 percent and those who do have jobs are often hired only on temporary contracts with limited benefits.

The squatters are pooling their money and sprucing up the building for Christmas. Schiena and Mulugeta have been working cash-in-hand jobs as cleaners and have managed to furnish their room with appliances, a television (complete with cable subscription), and a video game console.

The danger is that Rome is also enforcing more evictions -- pushing people from 176 buildings in 2011. This is a 12 percent increase from the number of squatter-occupied buildings the city vacated in 2007.

The government claims its combination of tax hikes and spending cuts will ultimately end the economic hardship. But the street-level view is not so rosy. Said Schiena, "All my friends are losing their jobs from one day to the next. I don't think this crisis is over."
Posted by rn at 5:49 AM No comments: