Abahlali baseMjondolo, the Durban-based squatter organizing group, once again makes the sane and humane argument that the eThekwini Municipality must overturn its ban on legal electrical connections in squatter communities.

The group notes that candles and kerosene lanterns can overturn and cause fires while improper wiring can short out, as happened on Monday when a teenager was apparently electrocuted in the community called Siyanda.

If the state continues to fail to recognise our humanity, and it remains up to us to recognise and defend our own humanity, then each community and each movement must take the responsibility to ensure that electricity is appropriated in a safe and well organised manner. Until this service is provided to everyone we have no choice but to continue to support Operation Khanyisa so that people can keep themselves safe from fires and benefit and advance their lives.

eThekwini officials, AbM says, rush to tell the newspapers how much money is being lost because of pirated, community-organised connections. "If they are so worried about this why don’t they put us on the electricity grid? By denying the people formal access to electricity they force the people to take electricity. They leave people with no choice."
Posted by rn at 12:03 PM 5 comments:

As the fast-expanding capital rushes to meet the settlement, what was once a speck in the distance is now just across the railway tracks.....

Reuters reports that authorities in Madrid have vowed to raze La Canada, a squatter community that has been in existence for 40 years.

Under the plan, the worst areas of the community of 40,000 will be bulldozed to make way for a park, and only a few residents will be eligible for rehousing. The article, in typical fashion, blames all of the drug addiction in Madrid on this one neighborhood (as if organized crime control over the drug trade doesn't even exist.)

It seems absolutely outrageous for a civilized country to deny rights to people who have lived in a community for decades.

As Victor Renes, of the Spanish charity Caritas, says, "You find yourself here, where it is still possible to settle and try to survive ... at the margins where the city tolerates you ... until the city arrives and bumps into you and then after that you are tolerated no longer."
Posted by rn at 11:32 AM 1 comment: 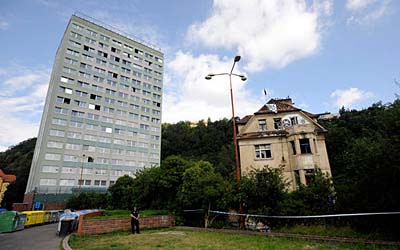 It's also a great irony that it was a government agency -- the the Institution for Information on Education -- that hired private security guards to push the squatters out. the Czech Republic's Human Rights Minister, Michal Kocáb, intervened to relocate the squatters into a privately owned building downtown, but the last four older residents of that partially occupied building fear that this is a move by the landlord to drive them out -- details at Ceske Noviny
Posted by rn at 12:13 PM 3 comments:

squatters vs. developers in the Philippines

A familiar story in a new place. The Philippine Daily Inquirer reports that Malabon Mayor Tito Oreta has said that between 35,000 and 50,000 people will be pushed out to free up land for development. He promises they will be relocated. I hope it's true. But how long have the squatters been in residence? Doesn't that longevity give them some right to stay?


P.S. Sorry for having taken a break from the blog for a bit. I was myopically trying to finish a manuscript. Slow suffocation by paper. But I'm still breathing and should be blogging regularly once again.
Posted by rn at 5:51 PM 4 comments: