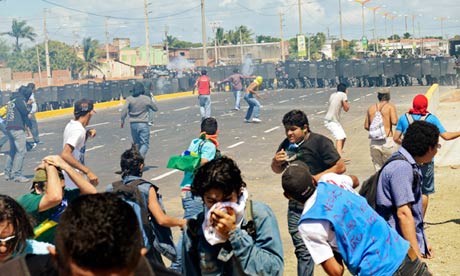 Money stat:
While 133,000 people in Fortaleza live in extreme poverty, 1/3 of them without any sanitation services, the city spent $230 million to renovate the local soccer stadium.
Posted by rn at 12:45 PM 1 comment:

Let's hope that Bangladesh follows through on this promise to bring water pipes to every Dhaka shantytown and squatter community in the next two years. As I said in a recent talk at TEDx Hamburg (not online yet, but it will be soon): if government's won't provide water, it's socially good for squatters to steal it. Two million people a year die of water borne diseases--and, whether squatters steal municipal water or government brings it, providing potable water to neighborhoods that have previously been denied it could save hundreds of thousands of lives.
Posted by rn at 1:08 PM 11 comments:

Istanbul at war with itself

"Across the city, the urban poor are being paid to leave their homes so that contractors — many with ties to government officials — can build gated communities."

This factoid was buried in a New York Times article about the Taksim Square protests in Istanbul.


For years, the government of Tayyip Erdogan has taken an oddly punitive attitude towards poor neighborhoods. They were part of his power base, but also areas that politicians selected for eviction and what was very loosely called redevelopment. Roma neighborhoods like Sulukule, Avcilar and Tarlabasi were among those in the cross hairs.

By 2009, 12,000 people had been forcibly removed from their homes -- but millions more were threatened as city officials proposed to 'rebuild' more than a million homes.

The government's methods were questionable, as the New York Times article suggests: As one Avcilar merchant told the paper, “One day we just got a notice, and bam, before we could put up a proper fight, 300 to 400 police came and held us back from intervening with the bulldozers that knocked down our restaurant. They said we didn’t have deeds for the property, but we do. We showed them. They argued that we only had a deed for part of the property, so they knocked the rest down.”

Of course, the majority of title deeds in Turkey are partial -- conveying what is called hisseli tapu, an ill-defined right to a shared interest in a parcel. By this standard, almost every neighborhood in Istanbul could be considered at risk of eviction and demolition.

Up until now, the Erdogan demolitions have succeeded because they destroyed neighborhoods with little political swat. Now officials have turned to Taksim--a popular crossroads for young people and tourists--and there's more pushback. In respose, Erdogan called the protestors "looters" and "bums" and denounced "a menace which is called Twitter."

A Hurriyet columnist suggests that the roots of the current protest stem from "the so-called “table operations” nearly two years ago and the symbolic tiny streets were “cleared off” from tables serving alcohol."

The suggestion seems to be that this is part of Erdogan's social war against secularism. But the eviction drives over the past five years suggest that this is a far wider war for the shape and soul of the historic city.
Posted by rn at 3:40 AM 1 comment: