see my post in Stealth of Nations.
Posted by rn at 12:29 PM No comments: 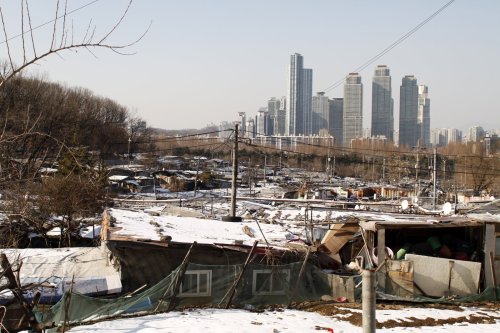 We tend to think of North Korea as the deprived country, but here's a peek at Guryong, a shantytown in downtown Seoul. Residents have been living in shacks here for more than 3 decades, ever since they were evicted in the 1980s as Seoul went on a development kick for the Olympics.

A recent fire has drawn attention to the community that is adjacent to the luxurious downtown neighborhood of Gangnam.

The Korea Herald has details.
Posted by rn at 12:25 PM No comments:

In Port Moresby, the capital of Papua New Guinea, "a chronic lack of affordable housing has resulted in even professionals and public servants moving into informal settlements as they shun available but unattainably priced private homes."

Here's the seriously bad math of housing in the city, according to The Asia Sentinel: "Many people in public service and formal private sector employment earning less than K500 (US$242) per fortnight are unable to pay rental costs of K5,000 per week for a two bedroom apartment, or the average purchase price of K1.3 million for a three-bedroom house in central Port Moresby. The private housing market mainly services expatriates and workers living in employer provided accommodation."

The average two-bedroom apartment in this city of close to 1 million people costs twenty times more than many workers earn.

Do we need any more proof that the housing market is broken? How can anyone even call this a market? It isn't even managed scarcity. It's absolute dysfunction. We're in the second decade of the 21st century -- and it's high time to admit that squatter communities are normal urban neighborhoods
Posted by rn at 1:13 PM No comments:

Treating people with dignity seems out of the question in Brazil, where authorities are moving ever faster to transform 12 cities for the World Cup and the Olympics. As the Associated Press reports, about 170,000 people have been threatened with ejectment, or have already been ejected from their homes.

Evandro dos Santos, from Favela do Metro, whose home and store are scheduled to be destroyed in a sprucing up of Maracana stadium, told the AP, "I have built something here - a house, a business. That's what I want. Not a gift, not charity. I want to keep on working and earning my money and feeding my family."


With preparations starting for the Olympics and World Cup, Metro's residents initially were offered government-built housing in a working-class suburb 45 miles away, with poor access to transportation and jobs. About 100 families accepted, under duress. Another 100 or so took the offer that followed: resettlement in a closer housing project. About 270 families are resisting the move, said the Metro residents association president, Francicleide Souza. "We are living in fear and uncertainty," Souza said. "We don't know what will happen to our families tomorrow." Compensation paid per home for Rio's removals in 2010 averaged $16,000. The amount varies according to the size and quality of a structure. The money offered is not nearly enough to find another home in Rio, said Eliomar Coelho, a city councilman heading an investigation into removals. Market studies say Rio's real estate is now among the most expensive in the Americas.

The world over, fancy sporting events have always meant massive evictions. The question is why? Why are poor people considered an eyesore? Why does the convenience of tourists matter more than the dignity and well-being of the population? Why do governments refuse to treat people with justice, fairness and dignity?
Posted by rn at 10:53 PM 6 comments: